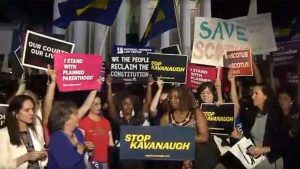 . . . or if Heitkamp, Manchin, Donnelly or Jones was one of my US Senators, I’d be sending them a letter that would go something like this:

You’re about to be forced to make an up-or-down vote on Brett Kavanaugh for Associate Supreme Court Justice, and no matter how you come down, you’re going to be screwed.  You can support your President and brave the wrath of every women of either party who values her constitutional right to control her own body, and believe me, you will be hounded in your offices and your town halls and you will be turned out the next time you have to stand in a general election.  People who vote, and women VOTE, don’t like to have rights they’ve been guaranteed for over forty-five years just stripped away.  And don’t forget what you went through last year with Trumpcare.

Or you can take door #2 and bring an abrupt end to your future in the Trumpublican party.  Like I said, either way you’re screwed.

Now the good news.  You don’t have to choose!

You can swear on a stack of Bibles that you will vote to confirm Brett Kavanaugh as soon as his nomination comes to the Senate floor for a vote.  You can praise him to high heaven and thank Donald J Trump Sr for the opportunity to endorse so inspired a SCOTUS pick.  But you’ve got two good reasons to make the truly conservative choice and withhold your vote for cloture on the nomination, denying a final vote until after mid-term elections, the seating of the new Senate and the completion of Mueller’s investigation into possible criminal activity during the 2016 campaign.

First good reason:  No subject of a federal criminal investigation should be allowed to pick their own judges and jurors,  This is a conservative bedrock principle undergirding the rule of law.  Because of Kavanaugh’s public record opposing even an investigation of a sitting CinC, to avoid a constitutional crisis or damaging impression of a conflict of interest his confirmation should be delayed until the Special Counsel’s investigation has demonstrated that the President is as innocent of wrongdoing as we all know him to be.

And if that reason isn’t enough for you, there’s the conservatively consistent application of the Rules of the Senate, in this case the McConnell rule that no hearings should be held or votes taken in the Senate to deal with a Supreme Court vacancy that occurs less than eight months before a national election.  After all, your voters have a right to be heard!

Believe me, your best bet for political survival is not to take a side on this one until you’re absolutely forced into it.

Faithful Reader, feel free to contact your Republican (or squishy Dem) Senator in their offices and town halls, at lunch, over the phone, or indirectly through letters to your local media, and use my arguments or your own better ones to convince them to back off this nomination.

Make an uncivil racket!  And VOTE at every opportunity!