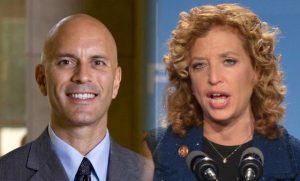 So the conventions are behind us, and Bernie’s revolution may not have overthrown the ancien regime but they negotiated a pretty good détente, far better than any of us could have expected when the Vermont senator announced his candidacy last year.

Now the question is, can the revolution keep up the momentum and start having a concrete effect on Democratic and national politics now that the national spotlight of the nominating campaign has been refocused?

One of the first places we might see an indication that Bernie’s army is still a force to be reckoned with will be Tim Canova’s primary campaign to take Debbie Wasserman Schultz’ seat in the House.  According to internal polls released by the Canova campaign, her support is around 50% and a good twenty points ahead of him, but her negatives are high, and Canova’s still unknown to 60% of the electorate, giving him a lot of room to grow.

DWS has been the chairwoman we loved to hate, and she got a lot of bad ink around the emails exposing how her top staffers had their fingers on the scale for Hillary, and her sudden undignified firing on convention eve, not to mention how she’s solidly in the pocket of the predatory lending industry.  If Bernie’s army (or Bernie himself) decide to impose a little instant karma in the form of attention, energy and donations on her opponent’s behalf, she could find herself out of a political career before we even get to November.

That would be a potent indicator of just how serious the political revolutionaries in the Democratic party are about consolidating their gains quickly and effectively.  And it would put incumbents on notice that the way to the real political center, where most outside-the-Beltway people are, is still a sharp turn to the left.

Keep an eye on this race.  It matters.