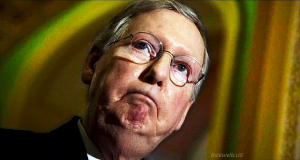 “Treason against the United States, shall consist only in levying War against them, or in adhering to their Enemies, giving them Aid and Comfort” – U. S. Constitution, Article 3, Section 3

The words “treason” and “traitor” are bandied about pretty freely in our political discourse, especially on social media.  It’s always made me a little uncomfortable when I encounter them to describe  vigorous opposition to whatever side of a burning issue is held by the speaker/writer who uses the terms.

Barack Obama was not a traitor when he made a deal with Iran to halt their nuclear program.  It was not treasonous for Mitch McConnell to refuse to allow hearings on a Supreme Court nominee.

I think I must have internalized some of the facts I learned in Mr. Harvey’s American History class back at Rome Free Academy in the early 60s, and they stay front of mind when I hear those words used.  The drafters of the Constitution were very careful to precisely limit the definition of “treason” only to actions taken to further the aims of the nation’s enemies.  They had lived under a regime in which an accusation of treason could be brought against anyone who uttered or published anything the King might find insulting.  They may have remembered cases like Catherine Howard, who lost her head for treason because she fell in love with a boy her own age after being married off to fat old disgusting Henry VIII.  They wanted to make it impossible to brand people as treasonous just for offending the powerful.

Since 2008 Mitch McConnell has dedicated his considerable political skills and his position as leader of the Senate Republicans to undermining every proposal offered and every action taken by the legitimately elected President, even to the extent of refusing to allow the constitutionally mandated duties of the Senate to be carried out if he thought it gave a political advantage to his party.  This was ill-advised, against the best interests of the country, and flagrantly contemptuous of our national ideals and traditions.  But none of it was treasonous.

Today the Washington Post has reported on a secret briefing given by the CIA to the leaders of the political parties and intelligence committees in Congress back in September, two months before the election.  They showed the evidence and conclusions of the intelligence agencies establishing the fact that Russia was interfering in our election through propaganda and cyber warfare with the express intention of getting Donald Trump elected to the Presidency.  The administration knew that to make such explosive revelations public during an election could lead to accusations that the power of the government was being used to influence the outcome.  They needed the bipartisan Congressional leadership to sign on to the findings.

According to the Post’s reporting, Mitch McConnell refused.  He threatened to accuse the administration of faking intelligence for political advantage if they let the public know what Russia was doing to undermine American democracy.

The irony here is rich.  After all, we did have a (Republican) administration that faked intelligence in order to build support for an illegal war of aggression not too long ago.  Some have called that treasonous, but by the letter of our Constitution it wasn’t treason, just a criminal abuse of power.  And while McConnell has used every political trick in the book to bring failure to the government and the nation, none of it has been illegal, let alone treasonous.

But this is different.

This is the Senate Majority Leader adhering to an enemy of the United States in the conduct of warfare against our democracy.  And perhaps largely because of his taking sides with our enemy, they achieved what they’d aimed for — an incompetent and compliant leader for their greatest global adversary.

I think I’ve finally found a case where the label of “traitor” actually fits.