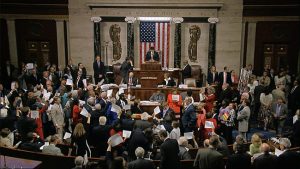 Unable to contact Speaker Paul Ryan’s office by phone or voicemail, I sent the following letter by fax to his office this morning ;

I’ve been following events on the House floor over the last day, and I’m appalled.

I’m a retired business owner, an Hispano-American, a Vietnam vet, the kind of voter that one would think your party would want to attract.

You are the most powerful Republican in the government, arguably the second most powerful political leader in the world. You have complete control over the agenda of Congress, and this is how you use your power? To ignore the passionate desire of nine out of ten Americans, nine out of ten members of your own party, nine out of ten gun owners, that something be done to curb murderers, terrorists, and mentally unbalanced lone wolves from easy access to weapons of war?

And to add insult to injury, you interrupt the outcry by people’s representatives whom your own actions have reduced to irrelevancy, in order to bring to the floor a vote to make it easier for con artists to rob people like me of our retirement savings.

How did you and the Republican party come to hold higher regard for the interests of murder profiteers, potential terrorists and thieves than for the expressed will of the people you are elected and paid to represent? Do you understand that the path you’ve chosen must ultimately lead to the rejection and downfall of your own party?

I write these words in sorrow, in the knowledge that you aren’t likely to pay them any more heed than you pay to the blood of innocents. But I can’t be silent in the face of such indifference and malfeasance.