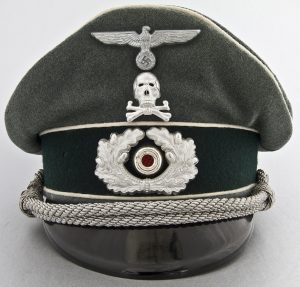 You know the Hat I’m talking about.  Not the one in the picture above, the other one, its little brother.

The Hat manufactured in China for the Drumpf to sell to the hordes who flocked to his ersatz Nuremburg rallies, the chumps, the deplorables, the liberal-baiters, Obama-haters, the unholy rollers, “Lock Her Up” howlers, immigrant bashers, protester punchers, the dead-ender wannabe-winners whose dream was to Make America Hate Again, White Again, who looked up at the contorted face of ignorance and malice and malignant self-regard and saw the person they wished they could be.

The Hat we all saw in Charlottesville marching under the banners of Nazis and Slavers and KKK terrorists. 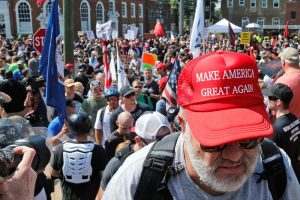 Did you see the video of the Dear Leader reading the words someone else wrote for him? Did you see on his face the distaste and reluctance he was feeling at having to offer a sop to the decency expected from anyone in his position on the occasion of a national tragedy? Did you see how his countenance changed when ad-libbing at the end — “on many sides, on many sides” — when he spoke words of his own to deflect accountability — nothing out of the ordinary here, happens all the time, not my fault. Same as it ever was.

Did you see him try to scurry away as quickly as possible, only to be reminded that he was there for another one of his staged signing ceremonies, walking back past the podium, ignoring questions? And after show-and-tell, passing the podium one more time, disdaining another opportunity to clarify his stand on Nazism and white supremacy and domestic terrorist murder, shaking his head in contemptuous denial?

The Drumpf’s normalizers and apologists have been doing their best for the last couple of years to play down the fact that his core supporters include racists and violent extremists, adherents of treasonous rebellion and fascist mass murder. But you know who thinks Drumpf’s a Nazi? Other Nazis. You know who thinks he’s a white supremacist? Other white supremacists. Within minutes of his televised statement, Nazi bloggers were congratulating each other for the support they were getting from the White House.

A woman was murdered this past weekend for resisting Nazis on the streets of America.

Let that sink in.

A woman was murdered for resisting Nazis on the streets of America, and Drumpf wants us to think this is normal — nothing to see here folks, move along.

A woman was murdered.  For resisting Nazis.  On the streets of America.  And the terrorist movement responsible for this atrocity is populated by Americans who claim they’re acting in the name of the President, who wear his Hat and trumpet his message and expect the rest of the country to cower in our rooms and leave the streets to them.

That Hat, with its message and its #MAGA meme, is now joined forever with the other symbols of hatred, ignorance, violence and contempt for American ideals that terrorists marched under last weekend.

Anyone who’d wear the Hat in public again after the events in Charlottesville is declaring adherence to one side, and it’s not America’s side.