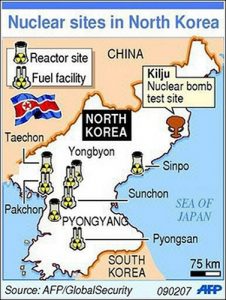 So Kim Jong Un’s Independence Day present for America was a ballistic missile test, and People-Who-Know-What-They’re-Talking-About have determined that if you flatten the parabola that dropped it just off the coast into the Sea of Japan, then it might be able to reach Alaska.

This is serious stuff.  Every time one more nation joins the exclusive club whose membership requirement is the capacity to toss a nuclear weapon a few thousand miles with malice aforethought (or no forethought at all), it’s serious.  The Democratic People’s Republic of Korea is baby steps from that goal, maybe already there for its closest neighbors.

From our putative leaders and PWKWTTA I’ve been hearing some saber-rattling, some goofy tweets, some gloomy assessments, even sometimes a little common sense, but I haven’t heard much about what strikes me as the best antidote to the threat of more war, and that would be more peace.

Everybody says Afghanistan is the longest war in our history at a mere fifteen years and counting, but actually we’ve been embedded in a war with North Korea for almost seven decades, just about my whole lifetime and longer than those of most living Americans.  It’s been going on uninterrupted for so long and with so little consequence to most of us that we’re barely even aware of it.

But a whole generation of North Koreans were born, lived long, and died in their old age in a nation at war, and none in the current leadership have known a single day of their lives when their country wasn’t at war with the most fearsome nuclear power on the planet, nor have they ever been allowed to just drop it off their minds.

And lest any of us forget, the last country to voluntarily give up its nukes was hammered back into the Dark Ages with a Nobel Peace Laureate leading from behind (Libya, look it up).  So let’s just say that hoping the most paranoid national leadership on the planet is going to give up its best insurance against regime change or worse from its eternal and almost infinitely overpowering blood enemy is probably a couple of hopes too far.

But maybe they could be persuaded to put it on hold as part of a treaty to finally bring an end to the state of war on the Korean peninsula.  Maybe a treaty recognizing their legitimacy, signed by the occupant of the White House as well as the president of their cultural sibs to the South, witnessed by their powerful neighbors and guaranteed by the UN under whose banner the Yankee devils fought their grandparents, maybe peace could be the peace offering they’ve been holding out for.

We don’t know.  It hasn’t been offered.

Obviously, it wouldn’t be a simple undertaking, especially under the current leadership in the US.  Each of the divided Koreas would have to see it in their best interest, and that means no re-unification in this generation.  Nor would China ever acquiesce to having a united Korea allied with its chief global rival sitting on its northeast border, but they might be glad to have an answer to their Korean refugee problem, especially if it kept a near neighbor from being  armed with nukes.

South Korea and the rest of East Asia could find economic benefits in a DPRK that wasn’t off-limits to investment, and the South in particular could renew cultural ties and reunite families and personal networks, while no people would benefit more than the citizens of the North.

The terms of the peace including the means of enforcing a halt, possibly even some retreat from DPRK’s current nuclear capability, would be crucial.  Real access for international inspectors to all nuclear and conventional military facilities on both sides of the 38th parallel would have to be part of any agreement.  Exchanging military observers between the two Koreas might help the peace as much as cultural and educational exchanges.  Reopening the Kaesong common industrial zone, as new President Moon Jae-in has clearly advocated, maybe with stronger protections for workers and the environment, could only facilitate North-South economic ties.

What’s in it for America?  The only feasible way to stop another country from gaining the ability to nuke us in our beds.  And all the benefits that accrue from reducing military tensions in a dangerous part of the world.  More peace.  That’s not nothing.

DPRK is poised to join one of the most exclusive, and most deadly, clubs in the world.  Shouldn’t we offer them a chance to join the other big club, the one of countries not at war?  Maybe that’s the club they really always wanted to join anyway.

I don’t pretend to be one of the PWKWTTA when it comes to global strategy, but for the life of me I can’t see why a plan along these lines wouldn’t be worth trying.  I’m taking this opportunity to invite anyone interested to explain to me why it’s not.