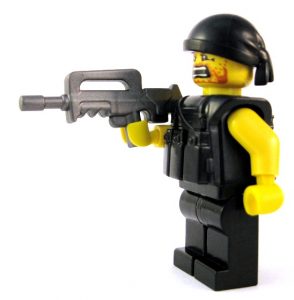 1. Arming Teachers Isn’t Just a Bad Idea, It’s a STUPID Idea. Thought experiment: Teacher with concealed carry handgun is writing a lesson on the board, crazed killer in body armor with AR-15 and high-capacity clip shoots through the lock and kicks open the door, teacher reaches for handgun from shoulder holster, chambers a round and clicks off the safety while turning to face the shooter, during which couple of seconds shooter pumps a dozen rounds through teacher’s torso, then pumps another hundred or so into students. Wait, wait, let’s correct this — teachers with concealed carry handguns should always keep them in hand with round chambered, safety off in anticipation of crazed killer, now we get an additional 100,000 or so annual deaths from accidental firearm discharges in classrooms. Wait, wait, there are lots of other ways this could play out — disgruntled student disarms teacher, kills classmates — nervous white teacher sees brown student reaching into backpack, blows his head off — teacher leaves loaded handgun on toilet tank in ladies’ room (this actually happened) — you can see the possibilities, not many of them have happy endings.

2. The Hardest Hardened School Won’t Keep Kids Safe. Because they’re only in school around seven hours a day, five days a week, nine months out of the year, and mass murders happen in airports, shopping malls, movie theaters, dance clubs, sidewalk cafes, concerts, you know, places where people go. And can’t you just picture 3000 kids lined up for airport style security, backpack searches, full-body patdowns, first hour of every school day? What do you think that would teach them? The sad truth is the only way the very toughest hardened school could keep all kids safe is if they’re never allowed to leave, cuts school right out of the school-to-prison pipeline.

4. Assault Rifles Have Only One Purpose — To Kill the Most People in the Shortest Time. That’s it, that’s all they’re good for*. You can’t hunt with them, unless just killing for fun is your bag (not the greatest sign that you can be trusted with weapons), because their bullets do so much damage they destroy any part of the meat or the trophy that they touch. They’re designed to do maximum damage, to kill whatever they hit, and to overwhelm opposition with rapid fire. Only a society with a death wish would allow them to be owned and carried by civilians, and everybody knows this. That’s why the vast majority of Americans of all political persuasions want them to be banned, along with specialty accessories that make them even more lethal — bump stocks, trigger cranks, high capacity magazines. The first and most important steps to making our children — hell, ALL of us — safer are to outlaw the sale, manufacture and import of military grade weapons except under license and contract to our military organizations, to outlaw the possession of rapid-fire accessories and high-capacity magazines, to appropriate money to buy back and take out of circulation as many as their current owners are willing to part with, to register every one that remains in private hands with the registered owners held accountable for any crimes committed with them, and to impose mandatory hard jail time for failure to comply.

*There is arguably one other use — guys who like to pretend that they’re macho action heros can blow off ammo with them at shooting ranges. My suggestion to these fantasy-role-playing tough guys is that if it helps them feel manly to handle a military assault rifle, then they should join the military. And if they’re not the kind of material our armed services want, then that’s a damned good reason why they should never be allowed near military weapons.

5. The 2nd Amendment Doesn’t Apply Here. The Bill of Rights does NOT confer an unlimited right for anyone to own any weapon, and it never has. The Founding Fathers themselves as well as every judicial precedent and legal interpretation accepted by the Supreme Court (whose job it is to tell us what the Constitution means) for the first 221 years of the Republic held that the 2nd Amendment confers no individual right to any American to own any weapon.  That interpretation of the law is less than ten years old and it came from the pen of Antonin Scalia, the most reflexively rightwing partisan to sit on the Court in at least the last three generations. And even HE agreed that the states and local governments are empowered to impose reasonable limits on weapons ownership. We had a constitutional ban on ownership of assault weapons before any of the Parkland victims were even born, and we’d still have one if the Bush II administration hadn’t allowed it to expire. We could have it again before this Easter if Mitch McConnell and Paul Ryan would allow a vote on the bill that stands before Congress right now. Everyone knows that the right to own machine guns, hand grenades, shoulder-mounted anti-aircraft missiles or suitcase nuclear bombs isn’t constitutionally guaranteed, no military-grade weapon should be different.

6. Gun Safety Laws Make a Difference. Don’t fall for that favorite line from do-nothing lawmakers, “This new law won’t make a difference, if a killer is determined to get a gun, nothing will stop him” or the variant version “This proposal wouldn’t have prevented that tragedy”. This is an even stupider argument than 1. 2. and 3. above. To see how profoundly stupid and insulting it is, just substitute any other prohibited activity — for example, “We have laws against bank robbery but people still rob banks, so bank robbery might as well  be legal” — see what I mean? California and Connecticut have the toughest state gun safety laws in the country, and some of the lowest rates of gun violence, Florida has some of the loosest laws and among the worst violence. The US is unique in the world for the looseness of its laws and its incredible prevalence of massacres, suicides, gun accidents and murders. Tough gun safety laws are the only way to fix this mess. 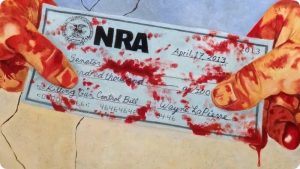 7. The NRA Isn’t a Gun Rights Lobby, It’s a Gun PROFITS Lobby. They pose as protectors of our liberties and the voice of gun enthusiasts, and when I was a kid they were the leading national organization promoting gun safety education and regulation, but they haven’t been that for over forty years. Polling consistently shows that their extremist positions are not supported by most Americans of either major party, not by most gun owners, not even by most of their own membership. The leadership of the NRA is funded by gun manufacturers and dealers with the sole aim of maximizing their profits by controlling lawmakers at federal and state levels.

8. Mass Murders Are Good for Keeping Profits Up. A nasty truth the death lobbyists don’t want you to think about is that nationally publicized mass murder events are good for business. Every time one of these horrific massacres happens, there’s a spike in gun sales. You’ll hear that gun sales have slackened off since Trump replaced Obama because gun enthusiasts aren’t as afraid that the gummint’s comin’ for their guns, and that’s true. Monthly sales figures for 2017 were lower than 2016, even in months where mass shootings made the news. But that’s just one of the ways they manipulate facts by comparing apples to oranges. The comparison that matters is gun sales in the days before a massacre vs sales immediately after a massacre, and they always go up. Mass murders improve the corporate bottom line and that’s why the NRA makes sure their servants in Congress never do anything that would stop them from happening. Their corporate lifeblood is literally the blood of our children, our neighbors, our families. They are the closest thing to pure evil that exists in America today.

9. It’s a Waste of Time To Try To Convince the Other Side. Know where the bodies are buried (and why) and never stop speaking the truth, but don’t spend energy trying to change minds of those who’ve been brainwashed by the NRA . They have their own set of alternative facts and a media bubble that reinforces their ignorance and intransigence. We need to understand how gun violence operates in our country, not to change minds, but to protect ourselves from being confused by their bullshit.

10. But That Doesn’t Mean We Have To Let Them Choose Our Lawmakers. We outnumber them almost nine-to-one, we can have the laws we need if we make ending the bloodbath our first priority. Know who’s running in every primary and general election where you have a voice, know where they stand on the reforms you want to see, and find out who’s taking money from the NRA. Make that the single issue on which you decide who gets your vote. And the good news is that when we throw out the NRA shills, we get other bonuses, because lawmakers who put human welfare and happiness ahead of corporate greed are also more likely to support social, racial, gender and economic justice.

11. Make Sure You’re Registered, Make Sure You Vote, Throw the Bastards Out. This last point isn’t so much about guns and safe spaces to live out our lives as it is a reminder that there are powerful forces working every day to make it harder for you to vote. In many states just because you’ve been registered your whole adult life doesn’t mean you won’t be turned away from voting if you present the wrong ID, if the middle initial on your birth certificate doesn’t appear on your driver’s license for example, or if you have a college ID but not an open carry license, if you took your husband’s name when you got married but didn’t clear it with the registrar of voters, if you have a common name (George Washington, Tom Jefferson, Jack Kennedy) and someone in another state with the same name owes $500 on some ten-year-old traffic violations. Verify your registration before voting day, don’t ever skip an opportunity to vote for any office or issue, and know WHY you support the choice you decide to make.

The Kids Are All Right, They Know Where They Want To Go, Let’s Help Them Make America Better Again 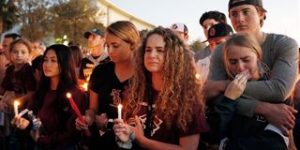