[This morning a good friend asked me for my foaming wassail recipe.  Remembering that I’d posted this nine years ago, my second ever blog post on dear departed Open Salon, I’ve pulled it out of my archive to share again with the world, updated notes in brackets and italics] 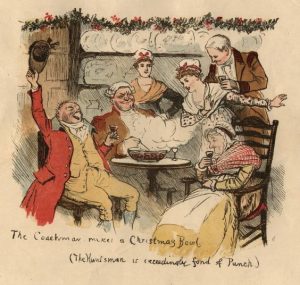 Next Saturday night will be Yule Eve [this year it’ll be on Wednesday 12/20 or Thursday 12/21, depending on your longitude], otherwise known as Midwinter Eve or the winter solstice, the longest night of the year.  When better to throw an all-night party?

On this night for the last twenty-plus years, Risa and I have opened our door from sundown till sunup to family, friends, friends of friends, neighbors, acquaintances, colleagues — basically anyone who knows about the party, or knows someone who knows about it, is welcome [sorry folks, we discontinued the family tradition after 2011, so please don’t show up, though my son Neil has revived it at his place in Victoria BC].  From year to year the character of the party varies.  When the solstice falls during the week, it’s usually a tamer gathering than on a Friday or Saturday.  As our kids have grown older, the median age of the partiers has gotten younger, and as we and our cohort have aged, the early morning hangers-on don’t seem to hang on the way we used to.

We encourage folks to bring their musical instruments, something to eat, drink or smoke, and their own bedding if they plan to stay the night and don’t plan to stay awake the whole time.  Risa bakes fresh gingerbread men the night before and sets up a decorating station with colored icings, always a hit with the kids of all ages.  And I make my foaming wassail.

a pound of honey

three to four quarts of beer, ale, stout or other brewed malt beverage

a bottle of sherry

a half-pint of brandy or liqueur

When I’ve gauged that the party has reached something approaching a critical mass, usually between nine and ten pm, I clear some elbow room in the kitchen (we have an open plan kitchen and living space, so I don’t have to leave the festivities), gather a trusted assistant or two mostly to clean up behind me, and go to work.

First melt the honey in a small saucepan with a couple of cups of water and the mulling spices, bring it to a slow simmer and leave it there.

Next, pour the beer and sherry together into a pot with a capacity of at least a couple of gallons and start warming it over a very low flame; you want to bring it just to the point where it would start boiling if you let it go another half-minute.

Now it’s time to separate the eggs, and here I have to make a digression to honor my Grandma Rose Walton who was born in the nineteenth century, who read me comic books and Babar stories and gave me back rubs always with a Chesterfield cigarette at hand, whom I promised at the age of five to marry when I grew up, and who was hit by a car at the age of 82 while crossing the street in front of her house.  Among the things I learned from her were that Communists were not the demons they were made out to be in the newspapers but just people who thought everyone should have an equal share in the good things of life, and the proper way to separate eggs.

To separate eggs, you need two bowls, a cup and a table knife.  Holding an egg in one hand, strike it sharply on its equator with the knife to make a clean sharp break in the shell.  Now put down the knife, and taking the eggshell in both hands separate it into two hemispheres, carefully rolling the yolk into the larger half without breaking it, and allowing the white to spill out into the cup below.  Now carefully roll the yolk into the smaller half of the eggshell, allowing the rest of the white to spill into the cup.  Dump the yolk into the bowl reserved for yolks, but inspect the eggwhite in the cup before pouring it into the bowl reserved for whites.  If there’s any trace of yolk in the white, put it in the yolk bowl and try to do better with the next egg, because you’ll never get those eggwhites to whip up into stiff peaks if there’s any yolk in the bowl with them.  So my Grandma taught me and I still believe her.

Now that you’ve got the eggs separated, whip the whites until they’re stiff enough to stand up in little peaks.

When I was younger and more of a purist, I actually did this by hand with a whisk, but for several years now I’ve found that the electric hand mixer does a better job in less time.  In these days of global warming awareness, I leave it to you to decide how best to reconcile your responsibility to the planet with the need for a more perfect wassail.  In my defense, I swear that I only use the electric mixer for this one task and only once a year.

Now quickly whip the yolks until they’re smooth and frothy, and then add to them the mulled honey (don’t forget to strain out the chunky mulling spice bits) a little bit at a time, whipping the mixture constantly so as not to allow the eggs to curdle.

Once you’ve finished combining the yolk and honey mixture, fold (do not stir!) it into the whipped egg whites, being careful to disturb them only as much as it takes to incorporate the cholesterol and sugar into the airy essence of albumen.

By now, your beer/sherry mix should be steaming hot.  Remove it from the heat, add the egg/honey mix and the brandy and serve warm, steaming and foamy.

At our house we serve it up in the silver punch bowl I won forty years ago on “Tic-Tac-Dough” [sadly lost with all our other possessions in the 2012 fire, so it goes], with Risa leading the revelers in a spirited rendition of the Gloucestershire Wassail song as the steaming bowl is carried to the table.

Make this recipe your own, and fold it into your own family traditions as it pleases you.